World of Warcraft and Other Games 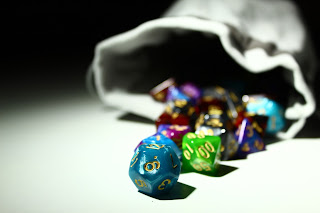 Photo by Alperen Yazgı on Unsplash
World of Warcraft and Other Games
Devin always tries to get me to play crazy games with him.  As I am writing this, I am playing Dark Heresy. Don’t know what that is?  Let me tell you.  Wait, I don’t know what it is.  I have no idea what I am doing?  We are using Skype and a website called “Online Dice Roller” to play.  It is a role-playing game.  Now I am not familiar with the world that this game is set in.  I know Dungeons and Dragons, but I am very confused about playing this game.
I may find that I love this game, but I am not sure right now.
My character is a 76-year-old Imperial Psyker.  I have violet eyes, bluish skin, and ginger hair.  It sounds creepy, right?  Well, my character is apparently so creepy that I have a power that creeps people out so that they are stunned and can’t do anything for around.  I was born on a spaceship, oh, and my occupation is a soothsayer.  So yes, I am confused.  I usually play Dungeons and Dragons, and I usually play a druid.  I like druids they know about nature and animals.  They know about stuff that makes sense to me.

I may find out that I actually like this game, but that remains to be seen.  It has happened before though.  I now actually like playing dungeons and Dragons now.  At first, I thought that it was boring.  Waiting for people to talk about what they were going to do and then waiting for your turn was boring.  I always wanted to do other things as I was playing.  I would write my Grocery list, read a book, write a letter, whatever I could do to keep my attention.  Devin suggested that I become a Dungeon Master.  I tried it and it was so much fun.  As the Dungeon Master, you are in charge of the entire game.  I didn’t just have to wait for my turn, because in a battle everyone was attacking my characters.  It was like it was always my turn. I loved it.  And if any of you remember the Alltel commercial.  I am going to try to post it here.  I hope it works.  I totally get it!

I had so much fun playing a vampire in a World of Darkness LARP (Live action Roll playing), and I am addicted to World of Warcraft.
World of Warcraft is so much fun.  I’m not even sure why it is.  You make characters and they level up but running around doing quests.  I think the addictive part of it is the excitement you get from leveling up.  I am playing an undead warrior.  I also have an undead horse.  It is so cool.

Posted by AuthorNancyann at 9:46 AM

Email ThisBlogThis!Share to TwitterShare to FacebookShare to Pinterest
Labels: My Ramblings, world of warcraft